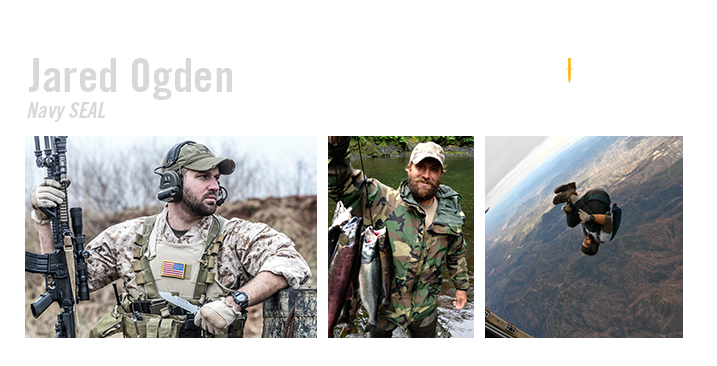 From a young age, Jared has always been an outdoor and wilderness enthusiast. Growing up in Georgia, his enthusiasm lead to his earning the rank of Eagle Scout, then graduating from the United States Naval Academy, and ultimately becoming a Navy SEAL.

As a dual-warfare qualified Naval Officer, both SWO and SEAL, Jared spent eight years in the Naval Service. During his Active Duty years, he deployed to CENTCOM four times and is combat decorated, having been awarded the Bronze Star with “V” for Valor, the Combat Action Ribbon, and multiple Joint Awards.

A huge component of Jared’s life revolves around giving back to those veterans who have made monumental sacrifices in battle. Five years ago and shortly after his Teammate, SEAL Dan Cnossen, lost both his legs to a victim-initiated IED, Jared founded the Phoenix Patriot Foundation, a 501(c)3, whose mission revolves around creating opportunities for combat wounded veterans post 9-11.

Since leaving the Active Duty component of the Naval Service, Jared has remained in the defense industry and is an advocate of the Department of Defense and its members. Jared continues to represent his brothers in arms on National Geographic Channel’s flagship Television program, Ultimate Survival Alaska. Additionally, Jared serves on U.S. Senator Johnny Isakson’s Academy Selection Committee.

Jared has also since found much peace reconnecting with his childhood roots of being in the wilderness. He never misses an opportunity to go on a hunt, not only for which he is thankful to harvest the meat and hides, but also a means of wildlife conservation. You’ll never find Jared in the field or in the city without his Camillus blade close by!